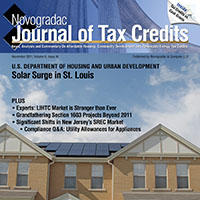 Despite remarkably successful track records — some decades-long — tax credit programs continue to come under attack by a handful of critics who suggest that cash grants might be more effective. To defend cost effective programs such as the low-income housing tax credit (LIHTC) and new markets tax credit (NMTC) against such attacks, Novogradac & Company has been commissioned to analyze the efficiency of the tax credits compared to that of comparable cash grants. We’ve also performed similar analysis of renewable energy tax credits (RETCs) and the historic tax credit (HTC).

What we’ve found, simply put, is that when compared to cash grant programs, tax credits are a more efficient way for the federal government to support affordable housing, community development, renewable energy and historic preservation.

NMTC vs. Cash Grant
In its March 2011 report “Opportunities to Reduce Potential Duplication in Government Programs, Save Tax Dollars, and Enhance Revenue,” the Government Accountability Office (GAO) suggested that Congress consider converting the NMTC program to a cash grant program. The GAO posited in the report that replacing the tax credit with a grant likely would make the federal subsidy more cost effective.

And now, an analysis commissioned by the NMTC Working Group confirms that the NMTC is more efficient at delivering subsidy to qualified active low-income community businesses (QALICBs) than is a hypothetical comparable cash grant program. In a report, “NMTC Program Outperforms Comparable Cash Grant Program,” Novogradac & Company explains that the GAO’s conclusion is based on analysis that ignores several key elements of the NMTC program, as well as added costs that would be inherent to a proposed cash grant program.

To assess the GAO’s claim, Novogradac & Company compared a theoretically-equivalent cash grant program to the NMTC program to determine the efficiency of each in delivering subsidy to a QALICB, the NMTC program’s intended direct beneficiary. In order to administer and monitor the cash grant program, upfront and ongoing costs would be incurred that would reduce the net benefits provided by a cash grant. The analysis factors in a conservative estimate of due diligence fees as well as ongoing annual compliance costs. In addition, the report assumes a conservative 10 percent non-recapturable failure rate in the analysis of a cash grant program.

LIHTC vs. Cash Grant
Similarly, over the course of its 25-year history, there have been suggestions that the LIHTC could be exchanged for a cash grant program. But, when Novogradac & Company LLP undertook a study for the Housing Advisory Group (HAG) to assess the LIHTC’s performance, we found that LIHTC-financed properties have a remarkable track record, particularly when compared to the performance of other federal government subsidies of affordable rental housing.

Among other things, the May 2011 report, “Low Income Housing Tax Credit: Assessment of Program Performance & Comparison to Other Federal Affordable Rental Housing Subsidies,” assessed the LIHTC program’s efficiency compared to the estimated efficiency of the cash grant exchange program. The report also documents that the LIHTC has a more successful track record than a number of other supply-side affordable rental housing programs that have experienced high default and foreclosure rates.

The report also identified several key structural reasons for the LIHTC’s remarkable track record. Chief among the program’s strengths are the involvement of a third-party for-profit partner, the placement of construction, lease-up and occupancy risk on the sponsors and investors instead of the federal government, the delivery of LIHTC benefits over time, and state and federal oversight. Many of these strengths would be absent in a cash grant program.

When cash grants in lieu of LIHTCs provided under Section 1602 of the American Recovery and Reinvestment Act of 2009 were set to expire, some affordable housing advocates argued for an extension. Yet, our analysis suggests that an extended exchange program could face significant issues in the long term. For example, a long-term exchange program would dilute the effectiveness of the underwriting and screening procedures that have been successfully honed and refined over the life of the LIHTC program. Also, under a grant program the responsibility for asset management and monitoring, traditionally borne by the private sector, shifts to the public sector—specifically to the credit allocating agencies. To download a copy of the complete report, “Low Income Housing Tax Credit: Assessment of Program Performance & Comparison to Other Federal Affordable Rental Housing Subsidies,” go to www.novoco.com/lihtcperformancespecialreport.php.

RETC vs. Cash Grant
Likewise, in an issue brief “Reassessing Renewable Energy Subsidies,” issued on March 22, 2011, the Bipartisan Policy Council (BPC) alleged that in most circumstances, cash grants are significantly more effective, and could be less expensive than the renewable energy production tax credit (PTC) or investment tax credit (ITC). BPC based this claim on analysis commissioned from Bloomberg’s New Energy Finance (BNEF).  However, BPC and BNEF’s conclusions fail to consider a number of important strengths that the ITC and PTC bring to the table that a cash grant does not, not the least of which are recapture risk, borrowing financing costs on cash grants, and after-tax effects.  The BNEF report also blurred over key distinctions between the renewable energy production tax credit (PTC) and investment tax credit (ITC).

And similar to the Section 1602 grant for affordable housing, the federal government provided cash grants under Section 1603 of the Recovery Act in lieu of the PTC and the ITC. That cash grant program is set to expire on December 31. At the time of this writing, some renewable energy advocates, such as the Solar Energy Industries Association (SEIA), were calling for an extension of the Section 1603 grant program.

The cash grant under Section 1603 is often perceived as more attractive to investors because of more favorable accounting implications treatment; we believe this reflects the illogicality of the generally accepted accounting principles (GAAP) treatment of tax credits for book purposes more than the economic benefits of a cash grant versus a tax credit. For a renewable energy projected financed with a Section 1603 grant, an investor typically makes a loan instead of an equity investment and that loan is repaid from the grant. But with the ITC or PTC, an investor makes an equity investment, which generally creates above the line GAAP book losses and below the line tax savings.

In fact, efforts to extend the program have taken this even further by proposing to adopt a refundable tax credit structure rather than proposing a simple extension of the existing Section 1603 program. Rep. Earl Blumenauer, D-Ore., last year proposed H.R. 4599, the Renewable Energy Expansion Act, which would make several technical improvements to the underlying Section 1603 grant program that would result in a grant program that more closely resembles the PTC and ITC.

HTC vs. Cash Grant
Finally, while the historic tax credit hasn’t been specifically proposed for replacement by a cash grant program, it shares many characteristics of the programs that have been attacked. And as such, historic preservation advocates should be prepared to defend the HTC in case the suggestion is advanced.
Fortunately, the HTC has a well-documented track record of creating jobs while it accomplishes its congressionally-mandated purpose. Indeed, when the Historic Tax Credit Coalition and Rutgers University released their annual study on the economic impact of the federal HTC, it showed that the federal HTC continues to outpace other economic activities such as highway construction, manufacturing and service sector industries in its ability to generate jobs, labor income, taxes and gross domestic product. In addition, the report describes how the HTC program actually pays for itself; during the last two years, the National Park Service allocated $1.58 billion in tax credits that increased estimated federal tax receipts by $1.6 billion.

Be that as it may, the HTC still faces a number of political challenges in today’s highly budget-conscious environment—as do all tax expenditures. To read more about the challenges facing the HTC, turn to page 55.

Conclusion
Compared to cash grant programs tax credits are a more effective way for the federal government to support affordable housing, community development, renewable energy and historic preservation. Tax credit programs have been refined and improved over several decades and feature a number of key characteristics, such as the involvement of for-profit partners and the risk placed on investors instead of the federal government, that make them inherently more efficient than federal cash grants.  And in this era of federal budget austerity, communicating that efficiency to lawmakers will be key to the survival of these important tax credit programs.