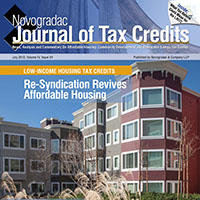 In addition to tax reform discussions in Congress that could directly alter the low-income housing tax credit (LIHTC), such as expanding the program or replacing it with an equivalent tax reduction on rental income, there are other tax reform scenarios that could have an indirect but significant impact on the ability of the program to create and preserve affordable rental housing.

If current corporate tax reform proposals are successful, even if the LIHTC remains unaltered, the amount of equity that can be raised from the tax credit could decrease significantly, according to a special report Novogradac & Company released in May. “Affordable Rental Housing After Tax Reform: Calculating Corporate Tax Reform’s Possible Effects on Equity Raised from Low-Income Housing Tax Credits” found that for the LIHTC equity market as a whole, this could mean a loss of $220 million to nearly $1 billion, or more, in equity used to finance affordable rental housing. This equates to a drop in LIHTC equity raised of between 2.7 percent and 13 percent, or more. The ripple effect these numbers represent is fewer affordable rental units built or rehabilitated each year.

“As the findings in this report allude to, tax reform is a difficult exercise – that’s why it hasn’t been done in 25 years,” said Rep. Pat Tiberi, R-Ohio, chairman of the Ways and Means Select Revenue Measures Subcommittee. “It’s complex and with more than 4,000 changes in the past 10 years alone, there are no easy answers. That’s why Ways and Means Chair Dave Camp has established an open process where the committee has heard from and will continue to hear from key stakeholders like you. We need information like the findings of this report to be shared with the chairman, members of the committee and our staff so we can go about this process with our eyes wide-open, aware of the ripple effects of changes to the tax code.”

Possible Outcomes
Tax reform generally strives for a lower tax rate achieved by a broader tax base. House Republicans have called for lowering the top corporate tax rate to 25 percent, while President Barack Obama suggested a top tax rate of 28 percent for most corporations and a 25 percent rate for manufacturing firms.

In terms of broadening the tax base, extending depreciation periods is one suggestion that has garnered much attention. Some have suggested moving to an alternative depreciation system (ADS), under which property depreciates over longer periods than under the current system. This would lengthen the depreciation period for residential rental real estate to 40 years.

The Novogradac report considers the possible repercussions of these two tax reform outcomes on LIHTC investor yields, investor equity pricing and the amount of equity raised. The evaluation is based on a series of calculations using an investor internal rate of return (IRR) model, with a conservative range of investor equity prices at $0.80, $0.90 and $1.00, for 9 percent investments and 4 percent tax-exempt bond investments. The scenarios we considered held constant factors that commonly affect investor demand and investor equity pricing, such as property type, transaction terms or Community Reinvestment Act (CRA) considerations.

What Could Happen to LIHTC Investment
The report found that if the amount of investor equity is held constant, lower top corporate tax rates lead to lower LIHTC yields, creating downward pressure on LIHTC investor equity pricing. Adding the effect of extended depreciation periods would further exacerbate these reductions. More specifically, these combined projected effects of lower corporate tax rates and longer depreciation periods could result in 5.7 percent to 9.8 percent less equity that could be raised for 9 percent investments. This represents a reduction in equity raised between $333 million and $719 million, or more. The 4 percent tax-exempt bond investments could see a reduction of equity raised of 8.9 percent to 12.3 percent. This translates to a drop in raised equity between $167 million and $244 million, or more.

As shown in the table, the combined effect of lower corporate rate tax rates and longer depreciation periods for 9 percent and 4 percent investments could mean a loss of nearly $1 billion in equity for affordable rental housing.

The report has already caught the attention of key legislators in Washington and would help them make informed decisions about tax reform, said Robert Rozen, a partner at Washington Council Ernst & Young.

“[The report is] useful for the industry because there’s an assumption that if tax reform is enacted and the housing credit is saved, it’s harmless. But under various scenarios, nearly $1 billion can be taken out of the industry,” said Rozen. “It’s the kind of information that’s useful to the industry, as well as policy makers. It’s very timely and helpful to see the impact of tax reform under different iterations.”

“This is an investment that pays out over a multi-year period. Changing the rules in the middle will also affect potential bottom lines on investments already made,” said Hertzog. “This makes investment committees skittish because the negative impact goes beyond pricing.”

Effect on Affordable Rental Housing Development
Based on the report’s projections, the potential loss of equity raised could reduce the total number of affordable rental units built or rehabilitated each year to 9,500 units or more. This would hamper housing providers’ ability to meet the needs of the lowest income populations that are in most need of affordable housing. It would make affordable rental housing development more dependent on gap financing resources, which continue to shrink in the face of budget cuts at the federal, state and local levels.

As such, affordable housing professionals and advocates should consider supporting proposals that maintain the effectiveness of the housing tax credit program. The National Multi Housing Council (NMHC) told Novogradac & Company that preserving the value of the LIHTC was one of its priorities in discussions with lawmakers, adding that the group believes legislators should make permanent flat 9 percent and 4 percent tax credit rates and allow income averaging to make the program more flexible for mixed-income housing.

Other proposals by industry leaders include a higher tax credit percentage, allowing the LIHTC to be claimed over a shorter period of time, allowing the full credit in the initial year of lease-up, or allowing more rapid depreciation of affordable rental housing properties.

You can download the full report from www.novoco.com. I encourage you to let me know what you think about the report findings by sending me an email at [email protected].