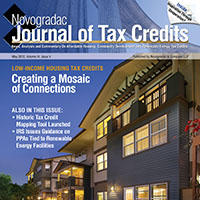 Congress faces no critical fiscal deadlines before September 30; however, the number and magnitude of fiscal deadlines start to build October 1 and reach epic proportions by April 15, 2013. One member of Congress has suggested that the number and magnitude of fiscal issues just might lead to bipartisan congressional action finding “inspiration through desperation.”

A series of budgetary and political factors have converged since early 2011, creating a perfect storm of fiscal pressure that will come to a head in late 2012 and early 2013. These developments have already affected sources of funding for affordable housing, community development, historic preservation and renewable energy, and as the fiscal crunch builds, the threats will likely grow more serious.

October 1, 2012
By October 1, 2012, Congress must pass, and the president must sign a budget for fiscal year 2013; it’s a deadline few expect will be met for at least a couple of reasons. First, Republicans and Democrats have proposed two budget plans so vastly different that the debate over spending and the deficit promises to persist and possibly worsen. Second, campaign politics will prevent serious discussion on specific budget items until after the fall election.

Nonetheless, President Barack Obama began the annual process on February 13 and released a proposed fiscal year (FY) 2013 budget. His plan would extend 100-percent first-year depreciation deduction through 2012; extend the new markets tax credit (NMTC) for two years; create a new $6 billion manufacturing communities tax credit; extend the wind investment and production tax credit (PTC) through 2013; extend the Section 1603 cash grant exchange program through the end of 2012 and then convert it to a refundable tax credit; and enhance and expand the low-income housing tax credit (LIHTC). To offset the cost of these provisions, the president called for raising $1.5 trillion over 10 years by taxing high-income taxpayers at a higher rate; by closing some corporate tax breaks, such as those for oil and gas companies; imposing a higher tax on dividend income; and reducing the value of tax expenditures for high-income taxpayers.

House Republicans on March 20, led by Budget Committee Chairman Paul Ryan, released a starkly dissimilar FY 2013 proposal. The GOP plan would lower projected spending levels by $5.3 trillion over 10 years and require several House committees to find sufficient savings over 10 years to avert the approximately $450 billion in planned defense cuts enacted in the Budget Control Act that will apply under sequestration in January of 2013. The House Republican plan passed March 29, 228-to-191, with no Democratic votes and 10 Republican defections.

This fall’s election makes it all but certain that a FY 2013 budget will not be passed by the October 1 deadline and Congress will have to pass a continuing resolution to fund government operations, at least until after the election. Ultimately, FY 2013 funding levels are very likely to be influenced by the outcome of the elections and depend on the priorities of the party that wins the White House as well as the party that wins control of the House and/or Senate.

December 31, 2012
Following on the heels of the FY 2013 budget negotiations is another round of expiring tax provisions. The outlook for deliberation on tax extenders this year is much less clear than it has been in previous years.

The relatively common process of passing a one-year extension of expiring business tax provisions was overshadowed and stymied by the debt ceiling and deficit reduction battle late last year. The tax credit community’s best-case scenario then included an extension of the NMTC, the PTC and the 9 percent LIHTC floor. But hope for a broad tax extenders package faded in late 2011 when lawmakers, driven by cost concerns, winnowed down the year-end extenders package to three provisions: the $22 billion Doc Fix; the $44 billion in unemployment insurance; and the $110 billion payroll tax cut. As a result, the NMTC, the Section 1603 cash grant and a number of other business tax provisions expired on December 31.

This brings us back to December 31, 2012, when the temporary extensions of the payroll tax cut, unemployment insurance benefits and Doc-Fix provisions are again set to expire, along with the so-called Bush tax cuts, the wind energy PTC and the annual AMT patch. Without the Bush tax cuts, the top marginal tax rate on ordinary income will jump from 35 percent to 39.6 percent on January 1, 2013; the regular top rate on capital gains will also rise.

It is unclear if extensions of the already-expired business tax extenders could be considered in December. A primary factor in the passage of these extenders continues to be finding revenue offsets that could pass both houses of Congress. The Joint Committee on Taxation estimates that extending for one year the provisions that expired at the end of 2011 would cost $36.9 billion over 10 years.

Further complicating the matter, some lawmakers recently called into question the effectiveness of tax extender provisions. On February 14 when Senate Majority Leader Harry Reid, Minority Leader Mitch McConnell, and Sens. Max Baucus and Orrin Hatch conducted a colloquy on the topic, Reid called for extensions to be taken up in a timely fashion. McConnell suggested a review of tax extenders should be conducted first to determine which should be dropped, modified or retained and Baucus agreed to the concept of a review but in the meantime urged immediate consideration for provisions that have expired. Hatch suggested that if a provision is worthy of being in the tax code, it should be permanent.

January 15, 2013
Assuming lawmakers are unable to reach agreement before New Year’s Eve on a deal to cut spending by $1.2 trillion over the next decade, the automatic spending cuts as mandated by the Budget Control Act of 2011 will be triggered on January 15. Cuts would apply to mandatory and discretionary spending in 2013 through 2021; Social Security, Medicaid, Medicare beneficiaries, civil and military employee pay and veterans benefits would be exempted.

Sometime Between December 2012 and March 2013
Also compounding the pressure on lawmakers at year’s end is the prediction that the debt ceiling will again be reached in early 2013; Treasury Secretary Tim Geithner warned March 28 that the debt limit may need to be raised in late 2012.

Early 2013
A significant influence on the long-term picture will be the ongoing movement toward comprehensive tax reform. The president released a proposed framework for tax reform on February 22 that called for eliminating certain tax expenditures, reforming the business tax base and either eliminating or making permanent and fully paying for existing temporary tax provisions.

House Republicans have also proposed significant changes to the tax code. The GOP FY 2013 budget proposal calls for tax reform that consolidates the current six individual income tax brackets into two brackets - 10 percent and 25 percent; repeals the alternative minimum tax (AMT); and shifts to a territorial international tax system. To achieve these lower top tax rates, the GOP plan suggests eliminating tax subsidies to broaden the tax base. Specific items that would be considered for elimination are not provided, and political considerations will delay the discussion of any specific provisions until after the election in November.

Tax writing committees could begin in early 2013 to draft legislative language to address comprehensive tax reform. As such, the outcome of November’s elections could factor greatly in the future path of tax reform.

April 15, 2013
The current AMT patch is set to expire this year. Without action on the AMT, approximately 15 to 20 million more Americans will be subject to AMT when they file their 2012 tax returns in April 2013.

Elections Will be Key, Before and After
How well or how poorly either party fares in this fall’s election will determine the extent to which deals can be reached. In light of the timing and size of the issues that will converge after the elections, some observers have speculated that bipartisan congressional action that has proved elusive in the past year may be within reach. Forced to address a crest of fiscal pressures, lawmakers could band together on a grand bargain to tackle several items at once. Or perhaps just a baby-grand bargain to buy themselves some time to deal with each issue in more detail over a longer timeline.

The tax credit community can expect all of these topics and related issues raised and debated on the campaign trail in coming months. Even though substantial action shouldn’t be expected until November at the earliest, the affordable housing, community development, historic preservation and renewable energy industries would be well advised to follow the debates and policy discussion in the meantime.