What the ‘Texas Case’ Means for the LIHTC Program Part 1 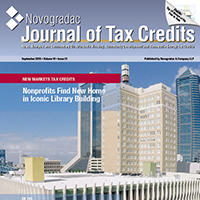 For many affordable housing professionals, the summer of 2015 will be remembered as a blur. The last few months saw an unusual level of program rollouts, news stories, important research, regulatory activity and official reports.

Yet even among all of these, one event stands out. Those familiar with the low-income housing tax credit (LIHTC) are accustomed to Congressional and cabinet agency involvement, but for the first time, the program was being considered at the highest level of the federal government’s third branch. Or was it? What does the most anticipated and talked-about occurrence of the season actually have to do with LIHTCs? The answer is not entirely clear.

Presumably anyone reading this has heard about Texas Department of Housing and Community Affairs v. Inclusive Communities Project Inc. (TDHCA and ICP, respectively), otherwise often referred to as the “Texas case.” Although the topic has been covered extensively in the trade industry press, there is always more to the story. This month’s article will start with the legal context, followed by a timeline of case. Part 2 will continue in the October issue.

An overall, recurring theme in what follows is the distinction between law and policy. The two have a great deal of overlap, but are crucially distinct.

Legal Context
The Texas case was decided under Title VIII of the Civil Rights Act of 1968, or the Fair Housing Act (FHA). This law is one of several affecting housing, another being the Americans with Disabilities Act of 1990 (ADA). Title II of the ADA covers how state and local government programs serve people with disabilities and was the basis for the U.S. Supreme Court’s 1999 ruling in what’s known as the Olmstead case. Title III of the ADA governs public accommodations, including accessibility of leasing offices.

Additional civil rights requirements apply when a property or program uses federal financial assistance, including Title VI of the Civil Rights Act (which prohibits discrimination based on race) and Section 504 of the Rehabilitation Act of 1973 (disability). Most forms of financial assistance, including those from the U.S. Department of Housing and Urban Development (HUD), are covered. Under current law, the LIHTC is not considered federal funding for purposes of these statutes.

While those statutes are important, only the Fair Housing Act was at issue in the Texas case. The first key to learning about the FHA is to understand that its provisions apply to discrimination based on a protected class: race, color, religion, sex, handicap/disability, familial status and national origin. Some state and local governments have their own fair housing requirements covering other classes, such as source of income (meaning landlords cannot refuse to accept Section 8 vouchers) and sexual orientation.

While race, and to a lesser extent disability, receive most of the attention, it’s important to remember all seven classes are protected. The question of what’s protected also is an instance of needing to keep in mind the distinction between law and policy. For example, housing discrimination based on income level (being poor) may be problematic, sometimes even reprehensible, but when truly on that basis alone it is not against federal law.

After the concept of protected classes, fair housing law becomes more complex. Broadly speaking, the FHA has two types of obligations, which can be described as negative and positive:

The latter is known as affirmatively furthering fair housing (AFFH) and was not an issue in the Texas case. Each aspect applies at both the project and program level. The matrix provides a summary overview.

So what is disparate impact? As implied in the matrix, it means a violation of fair housing not requiring proof of being intentional. As formally defined by HUD (in a rule cited below):

A practice has [an illegal] discriminatory effect where it actually or predictably results in a disparate impact on a group of persons or creates, increases, reinforces or perpetuates segregated housing patterns because of race, color, religion, sex, handicap, familial status or national origin.

As noted above, a policy or practice limiting housing choice based on income level alone is not a violation of the law. However, if it has a disparate impact on a protected class, then fair housing may apply.

A recent law review article by Stacy Seicshnaydre (“Is Disparate Impact Having Any Impact? An Appellate Analysis of Forty Years of Disparate Impact Claims Under the Fair Housing Act,”) describes what are two types of illegal actions.

The first is a “housing barrier,” preventing the creation of properties that likely will be home to those who are different from the current population based on a protected class. “In short, housing barrier regulations frequently perpetuate racial segregation,” Seicshnaydre writes.

The author identifies another type as a regulation, “purportedly designed to improve the condition of housing and/or the surrounding neighborhood.” The resulting legal challenge is based on involuntary displacement disproportionately affecting minorities.

The policies at issue in the Texas case do not necessarily fall into either category, but the distinction was important to the court. The law review article’s analysis of disparate impact litigation also is relevant to the decision’s significance going forward.

The last part of the legal context is to explain the federal court system’s three main levels:

Case Timeline and Outcome
The plaintiff is a Dallas-based nonprofit led by Betsy Julian, who served as HUD Assistant Secretary for Fair Housing and Equal Opportunity in the Clinton administration. One of ICP’s activities, according to its website, is helping minorities live in areas with “good schools, affordable housing, safe neighborhoods and economic opportunity,” primarily through using tenant-based Section 8 vouchers.

ICP filed its lawsuit against TDHCA in 2008, alleging both intentional discrimination and disparate impact. These charges were based on a claim that the agency’s policies did not produce enough LIHTC housing in areas fitting the description above, making ICP’s mission more difficult to carry out. Since LIHTC owners cannot refuse to accept vouchers, such properties are important to creating opportunities for low-income minorities.

While siting affordable housing based on the quality of schools, safety, or economics may be good policy, considerations of these factors is not mandated under the FHA. Therefore ICP’s legal case actually was premised on not enough affordable housing being produced in predominantly white neighborhoods. The alleged effect was on minorities not having access to those areas.

In March 2012, the district court ruled against the claim that TDHCA had intentionally discriminated in its allocation of LIHTCs, but found the state’s policies resulted in a disparate impact. TDHCA appealed.

In February 2013 HUD issued a final rule entitled “Implementation of the Fair Housing Act’s Discriminatory Effects Standard” (24 C.F.R. pt. 100). Since the appeal was still pending, the Fifth Circuit was able to adopt the rule as the applicable legal standard for such cases in the states under its jurisdiction. In March 2014, the circuit court remanded the case back to the district court to reconsider the facts using the approach laid out in HUD’s rule.

Later that year, the Supreme Court granted certiorari, but specifically limited its review to only the discrete question of whether the FHA allows disparate impact claims. In other words, is proof of intent necessary to find a violation of fair housing law? The facts of the case, validity of TDHCA’s policies and implementation of the LIHTC program would not be considered.

In January, the Supreme Court heard oral arguments. Then the affordable housing industry waited for what ended up being nearly six months. On June 25, the Supreme Court ruled against TDHCA, finding disparate impact is a valid basis for complaints under the FHA. Evidence of intent is not necessary to prove a policy or practice is discriminatory.

As a general matter, the outcome is hugely consequential. Many fair housing actions begin without any proof of the defendant’s state of mind, in contexts ranging from local zoning to home mortgage underwriting. But strictly speaking, the answer to the question above is no, the decision was not specifically about LIHTCs.

So why has the industry paid so much attention? How does the Texas case matter?

Part 2 will address this question through an explanation of the majority opinion. The next article also will cover the HUD rule, legal implications of the decision and what it might mean for policy. The case and other related fair housing issues will also be the topic of a panel during the Novogradac Affordable Housing Tax Credit Conference, Oct. 1-2 in New Orleans.