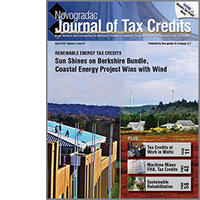 The April 2010 issue of the Novogradac Journal of Tax Credits.

Gov. Jay Nixon said in his fiscal year (FY) 2011 budget summary that Missouri is in a better financial position than most other states. Nevertheless, a 12.7 percent decline in 2010 fiscal year-to-date revenues on top of a record 6.9 percent decline in FY 2009 is forcing Nixon to cut more than $850 million from this year’s budget, and more cuts from this budget and the next may be on the horizon. To make matters worse, the state commissioner’s office predicts a more than $200 million shortfall in revenue collections for next year.

EOS Ventures, a renewable energy development and financial services company, was poised to lose $5 million last summer. The Berkshires-based company had entered solar power purchase agreements (PPAs) with seven organizations throughout its home state of Massachusetts and planned to use state grants to offset a significant portion of the installation and material costs. When Massachusetts changed the way it calculated the grant funding, EOS lost 26 percent of its grant money days before closing which threatened to derail all seven projects.

Historic preservation and sustainability go hand in hand. There is a misconception that historic preservation tax credit (HTC) projects and LEED certified projects are mutually exclusive. On the contrary, green development and preservation can both be achieved when rehabilitating a historic building; thus, opening the door for developers and property owners to benefit from using federal, state and local historic incentives while meeting green building standards.

The Coastal Community Action Program (CCAP) of Aberdeen, Wash. gives people the resources they need to achieve independence. Now the not-for-profit CCAP is taking a step toward securing its own self-sufficiency by completing the Coastal Energy Project, a 6 megawatt (mW) wind development near the Washington coastline in Grayland, Wash.

Last year in August I wrote in this space about the affordable housing industry’s efforts to coalesce around its response to the steep decline in equity prices for low-income housing tax credits (LIHTC). In their effort to build consensus, industry leaders met to discuss several options and the political realities of getting their proposals approved by Congress.

Native American tribes generally consider the block grants provided under the Native American Housing Assistance and Self-Determination Act (NAHASDA) to be effective, according to a study by the Government Accountability Office (GAO) released in February...

Legislation to increase the cap for the Kansas Historic Tax Credit (HTC) program passed the Senate in February and the House in March. Under the Senate-passed version of the measure, the program will receive $5.7 million in the next fiscal year, according to the Journal-World...

Portland General Electric (PGE) expanded its solar energy resources with a new 2.4-megawatt rooftop project, the company reported in March. PGE is partnering with U.S. Bank, ProLogis and several Oregon companies on the project. The three-city project is PGE's second with ProLogis...