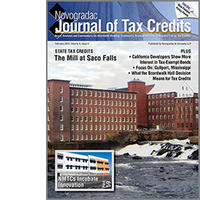 The February 2011 issue of the Novogradac Journal of Tax Credits.

The 112th Congress convened in early January and the topics of tax reform, deficit reduction and fiscal policy were front and center as lawmakers discussed goals and priorities for the year. As the affordable housing, community development and renewable energy communities chart their legislative courses for 2011 it is important to understand the challenges they will likely face amidst political climate change.

By the time you read this column, the Obama Administration will have (or at least should have, according to congressional mandate) released its plan to reform the U.S. mortgage finance system, with much of the focus, attention and controversy on how the plan proposes to restructure the two titans of mortgage finance: Fannie Mae and Freddie Mae, also known as housing government sponsored enterprises (GSEs).

While the low-income housing tax credit (LIHTC) industry has spent a great deal of time discussing stimulus funding, from a long-term perspective the more consequential legislation was enacted a year before the American Recovery and Reinvestment Act.

Question: What can cause recapture of federal rehabilitation (historic) tax credits? How is recapture calculated?

As ably discussed by my friend John Leith Tetrault in this issue of the Journal, the Tax Court delivered something of a blockbuster decision right at the start of 2011.

The Securities and Exchange Commission (SEC) approved a proposed rule to expand its definition of "municipal advisors" to include the appointed board members of housing and other government finance agencies.