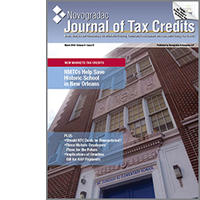 The March 2014 issue of the Novogradac Journal of Tax Credits

Now that the U.S. Department of Housing and Urban Development (HUD) has implemented its 2014 rent and income limits, developers, investors and other low-income housing tax credit (LIHTC) stakeholders have an opportunity to re-examine the challenges posed by the gap between many areas’ income limits under the Internal Revenue Service’s hold harmless policy and those published in HUD’s Multifamily Tax Subsidy Projects (MTSP) income limits.

Question: Can a business rely upon proof of an individual customer’s participation in other federal programs targeted specifically to low-income individuals and families (e.g., Medicaid) as a proxy for income documentation under the targeted population rules?

Answer: It may be possible, but issues related to timing would pose challenges.

The chairman of the Senate Finance Committee wields substantial influence because of the committee’s role in taxation matters, among other issues. Considering the increasing consensus about the need for tax reform, this is especially true today. With the Feb. 6 confirmation of one of the driving forces behind recent tax reform efforts, Senate Finance Committee Chairman Max Baucus, D-Mont., as the U. S. ambassador to China, it’s widely believed that the next chairman could play a key role in shaping the future tax code.

The U.S. Department of Housing and Urban Development (HUD) is soliciting comments on quality control for rental assistance subsidy determinations. In a notice published on Nov. 18, HUD announced that it is conducting a study to update its estimates of the extent and type of errors...

The Community Development Financial Institutions (CDFI) Fund announced on Dec. 20 that the Bank of New York Mellon (BNY Mellon), a global investment company, will be the master servicer/trustee for the CDFI Bond Guarantee program. BNY Mellon will provide custodial, loan administration, servicing, monitoring and other...

On Dec. 12, the U.S. Department of Energy and U.S. Department of the Treasury announced that $150 million in Advanced Energy Manufacturing Tax Credit program (Section 48C program) clean energy tax credits would go to 12 businesses investing in domestic manufacturing equipment. This is the second phase of funding for the...

The Louisiana Department of Revenue released revenue information bulletin No. 14-005 on Jan. 2. Bulletin 14-005 addresses individual, fiduciary and corporation income, and franchise taxes in the Louisiana Tax Credit Registry. The bulletin states that transferable tax credits granted on or after Jan. 1 to be applied against taxes collected...

The Novogradac Rent & Income Calculator © has been updated to include the U.S. Department of Housing and Urban Development’s (HUD’s) income limits for fiscal year (FY) 2014. Income limits are used to determine income eligibility for HUD’s assisted housing program...