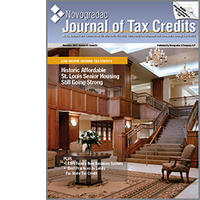 The November 2015 issue of the Novogradac Journal of Tax Credits

This is the time of year for forecasting and planning. And despite the uncertainty that surrounds the likely tax extenders package, there are some points to consider now so you can generate the maximum benefit from certain tax provisions widely expected to be extended. For tax credit investments, developers and project sponsors must negotiate with their investors now to ensure that if these expected tax extenders materialize and the investors receive the added benefits that will result, they will contribute additional capital into their investment partnerships.

Of particular importance to the monetization of renewable energy tax credits are projections, sometimes referred to as investment assumptions, the model or the spreadsheet. This set of numbers present the anticipated cash flows and tax consequences associated with the investment. Starting with the projections, parties negotiate the size and timing of the capital contributions and other important features of the transaction.

A meeting in early January convinced Susan Kluttz that the North Carolina state historic tax credit (HTC) could be brought back. All it took was an eight-month tour by the state’s secretary of the Department of Cultural Resources to more than 50 cities that prompted more than 1,700 newspaper, radio and TV stories and myriad letters from constituents to their legislators. The result: North Carolina’s HTC was reinstated as part of a budget bill in September. ...

The Advisory Council on Historic Preservation (ACHP), in partnership with an inter-agency Steering Group (the Department of Homeland Security, the Federal Emergency Management Agency and the Council on Environmental Quality), ...

The Solar Energy Industries Association (SEIA) released a report Sept. 15 that predicted that substantially more solar generating capacity will be constructed in the United States, and a major industry downturn will be avoided, ...