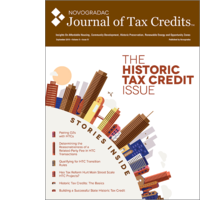 Abridged version of the September 2019 issue of the Novogradac Journal of Tax Credits. For more content, please subscribe to the Journal.

Question: What is the historic tax credit (HTC) transition rule and how does a building qualify?

Answer: The HTC was modified under tax reform passed in December 2017. Under prior law, qualified rehabilitation expenditures (QREs) were taken into account for the taxable year in which these expenditures were placed in service, which meant that the HTC was claimed in full when the property was placed in service. However, under tax-reform legislation, HTCs resulting from QREs paid or incurred after Dec. 31, 2017, are claimed ratably over five years.

Question: What should a project consider when twinning new markets tax credits (NMTCs) and historic tax credits (HTCs) in a transaction?

Answer: There are many factors to consider when setting up a financing structure using both the NMTC program and the HTC program.

The buzz about opportunity zones (OZs) is widespread and growing. Developers, investors and business owners throughout the country are working quickly to learn about the new community development tool that helps deploy capital into underserved areas.

One of the nation’s most expensive states to live in is making an unprecedented amount of funding available for housing construction and renovation, with an emphasis on affordable rental housing.

The New Markets Tax Credit (NMTC) Coalition July 18 released its annual report on the NMTC, which includes a survey of community development entities (CDEs). The “New Markets Tax Credit Progress Report” says that the surveyed CDEs used $3.2 billion in NMTC allocation in 2018 to finance 286 developments in 48 states, Puerto Rico and the District of Columbia, with $61 billion in investment to low-income communities. The report said more than 58,000 jobs were created, including nearly 33,000 permanent, full-time positions. More than 70 CDEs participated in the survey. A copy of the report is available at www.newmarketscredits.com.

The renewable energy investment tax credit (ITC) would be extended five years under legislation introduced July 25 in both the House of Representatives and the Senate. The Renewable Energy Extension Act of 2019 would provide a five-year extension for both the ITC and the Section 25D tax credit for residential energy-efficient property. Barring a change, the ITC will begin a phasedown from 30 percent at the end of this year to a permanent 10 percent in 2022. Rep. Mike Thompson, D-Calif. introduced the bill in the House with two Republican co-sponsors, while Sen. Catherine Cortez Masto, D-Nev., was the sponsor in the Senate, with 14 Democrat co-sponsors. A copy of the bill is available at www.energytaxcredits.com.

Legislation to permanently authorize and reform the Community Development Block Grant-Disaster Recovery (CDBG-DR) program was introduced July 11 in the House of Representatives and July 26 in the Senate. The Reforming Disaster Recovering Act of 2019 would require a one-for-one replacement of public housing and other federally subsidized rental housing in the case of CDBG-DR funding after natural disasters. The legislation would also maintain a requirement that at least 70 percent of CDBG-DR funds benefit low- and moderate-income households. The legislation would require that the U.S. Department of Housing and Urban Development (HUD) allocate federal disaster assistance money within 60 days of when Congress approves CDBG-DR funding.