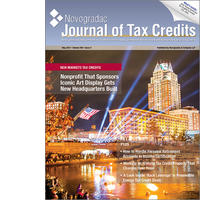 The May 2017 issue of the Novogradac Journal of Tax Credits.

The Current: What is ‘Back Leverage’ and What Do I Need to Know About it?
Forrest D. Milder
Tuesday, May 9, 2017

There was a time when most renewable energy tax credit (RETC) projects were financed with a combination of project-level debt and equity. If an LLC owned the project, typically the managing member (MM) provided the “sweat” and a small amount of cash. The investor member (IM) provided cash proportional to the tax credits it was being allocated and a lender provided the balance, sometimes on a nonrecourse basis and sometimes with the benefit of a guarantee by the MM or an affiliate.

Ray Charles, AC/DC, Black Sabbath and Buster Keaton have something in common: Each was a headliner at the historic Capitol Theatre in downtown Flint, Mich.

Residents of Providence, R.I., love WaterFire, an iconic series of 100 bonfires on three rivers in the city’s downtown area. The massive artistic events, generally held two Saturdays a month from May through November, have drawn more than 15 million visitors since WaterFire was created by Barnaby Evans in 1994. The community established a nonprofit to support the artwork as an ongoing arts installation.

Commercial buildings are not static and do not exist in a vacuum. Intact buildings are rare. Rather, commercial structures are creatures of the real estate market and success invariably means they must be updated to meet evolving market expectations.

The Office of Program Evaluation and Government Accountability (OPEGA) of the Maine State Legislature issued the report, “New Markets Capital Investment Program: Current Portfolio of Projects Produced Positive Outcomes; Cost-Effectiveness Could be Improved,” in mid-March. The report reviews the Maine New Markets Capital Investment program, concluding that the program has increased investment in community development and jobs, but that the program lacks clarity about how cost-effective it actually is. OPEGA estimated the net impact to the state budget to be an overall positive impact of $15 million for the period of 2013-2021. The report also stated that the program created or retained 764 permanent jobs that still existed as of 2016, as well as 781 temporary jobs and another 1,034 indirect jobs. However, OPEGA stated the 764 permanent jobs translates into a one-time investment of $99,179 per job and the state statute does not ensure that locally distressed communities in which the businesses are located will benefit from the program. The report is available at
www.legislature.maine.gov.

National Park Service (NPS) released its annual report March 10 for fiscal year (FY) 2016, “Federal Tax Incentives for Rehabilitating Historic Buildings.” The report stated that NPS approved 1,299 federal historic tax credits (HTCs) projects worth $7.16 billion in rehabilitation costs in FY 2016. In addition, an estimated 108,500 jobs were created by the HTC in 2016 and a record 21,139 housing units were built or rehabilitated. An accompanying document, “Statistical Report and Analysis for Fiscal Year 2016,” states that in the 40-year history of the HTC program, 42,293 projects have been certified, worth more than $84 billion in investment. The report and analysis can be found at www.historictaxcredits.com.

The ribbon cutting for Glennview Townhouses II in Jersey City, N.J., was April 7, completing a seven-phase redevelopment that began in 2001. Glennview II, which costs $21.4 million, provides 56 affordable apartments and eight market-rate apartments. Financing for the last installment included $4.7 million in Hurricane Sandy funding provided by the New Jersey Housing and Mortgage Finance Agency and $9.5 million in low-income housing tax credit (LIHTC) equity. Bank of America invested in the LIHTCs and also provided a $3.7 million construction bridge loan. An additional $3.3 million in Jersey City Housing Authority (JCHA) capital funds and $6.2 million in conduit bonds were provided. The initial phase was financed with a $34 million HOPE VI grant. The seven phases are part of a revitalization plan for the former Lafayette Gardens public housing site. Of the seven phases, two accommodate senior residents while the remaining five are family sites.

New Hampshire Housing (NHH) issued a memo March 24 to owners and management agents with Section 8, Section 202 or Section 811 properties to obtain a Dun and Bradstreet Numbering System (DUNS) number and to register with sam.gov, as well as to renew the sam.gov registration annually. NHH stated that having an active DUNS number and being currently registered is critical for Section 8 contracts to be paid housing assistance payments (HAP) and for the U.S. Department of Housing and Urban Development’s (HUD’s) Fort Worth Accounting Office to renew expiring contracts. NHH  addressed on March 20 the transmission of confidential information and management review response documentation. NHH stated that owners and management agents have a moral and legal obligation to protect this information. As a reminder, NHH asked for cooperation with its information security program to ensure that the personally identifiable information of residents is not inadvertently disclosed to the wrong parties. This includes personal home address, Social Security number and medical information, among other items.