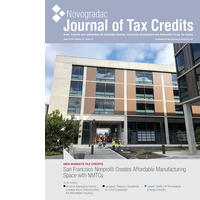 The June 2018 issue of the Novogradac Journal of Tax Credits. For more content, please subscribe to the Journal.

While rents in San Francisco rise and many local businesses are being pushed out of the city, PlaceMade is doing something.

Have you ever wondered why, during the lease-up of a property, it’s important to fully occupy a building before moving to occupy the next building? Or why it’s crucial to move in low-income households before the end of a month?

The Treasury Department has recommended that federal banking regulators significantly update how they implement the Community Reinvestment Act (CRA) to reflect sweeping industry changes and serve communities better. The next move is up to the three federal banking agencies.

SunTrust Community Capital, together with YMCA of the Triangle and CAHEC New Markets, announced April 19 the closing of a deal to finance a $41 million recreation center and school in Raleigh, N.C. Financing included $21 million in new markets tax credit (NMTC) allocations, with $15 million in NMTCs provided by CAHEC New Markets and $6 million in NMTCs provided by SunTrust. The facility will house a 42,960-square-foot recreation center with a wellness center, gymnasium and group exercise studio. There will also be a 71,908-square-foot school building that will be operated by and leased to the Wake County Public School System. The YMCA center will bring 28 permanent jobs to the area, as well as 129 construction jobs. The facility is set to open August 2019.

As of mid-April, restoration of the former James Scott mansion in Detroit was almost complete. Initially built in the 1890s and later expanded, the 24,000-square-foot three-story building is undergoing a $6-million transformation into 26 apartments, with the help of $1.4 million in HTC equity.

The U.S. Department of Housing and Urban Development (HUD) issued a memo May 1 announcing new guidelines for closing a Rental Assistance Demonstration (RAD) transaction after the RAD conversion commitment (RCC) is made. The memo, by HUD Office of Recapitalization Director Tom Davis, says agencies undergoing RAD conversions have 90 days to close their transactions after receiving the RCC, unless granted an extension by HUD. HUD created a new delayed submission status for properties whose closing packages are not received by HUD two months after the RCC is issued. If there is no evidence the public housing agency is progressing to closing the transaction, the RCC may expire. The new delayed submission status began with RCCs issued May 1. The memo is available at www.hudresourcecenter.com.