The low-income housing tax credit (LIHTC) program, created in 1986 and made permanent in 1993, is an indirect federal subsidy used to finance the construction and rehabilitation of low-income affordable rental housing. Washington lawmakers created this as an incentive for private developers and investors to provide more low-income housing. Without the incentive, affordable rental housing projects do not generate sufficient profit to warrant the investment.

Financed projects must meet eligibility requirements for at least 30 years after project completion. In other words, owners must keep the units rent restricted and available to low-income tenants. At the end of the period, the properties remain under the control of the owner.

Claimed pro rata over 10 years, the tax credit can be used to construct new or renovate existing rental buildings. The LIHTC is designed to subsidize either 30 percent or 70 percent of the low-income unit costs in a project. The 30 percent subsidy, which is known as the so-called automatic 4 percent tax credit, covers new construction that uses additional subsidies or the acquisition cost of existing buildings. The 70 percent subsidy, or 9 percent tax credit, supports new construction without any additional federal subsidies.

Rental properties that qualify for the LIHTC tend to have both lower debt service payments and lower vacancy rates than market-rate rental housing. LIHTC properties typically experience a relatively quick lease-up. LIHTC properties are often packaged as limited partnerships such that they afford limited liability to their investors.

Broad economic principles influence where financed affordable housing will be built. Economics generally make it more difficult to build financed housing in major cities because land costs are higher and low-income rents are substantially below market rate. Nonetheless, with the help of additional federal, state and local subsidies, many developers have made these projects financially feasible.

Once an applicant secures a tax credit reservation, the developer must leverage the financial resources for the development. Under a typical LIHTC transaction, a developer must secure a conventional loan from a private mortgage lender or public agency, gap financing from a public or private source and equity from the developer or private investor in exchange for the tax credits.

Once the project is built, states must ensure that it meets the LIHTC eligibility requirements. The LIHTC property must comply throughout the 15-year period or investors will be exposed to recapture of some of the credits. State housing agencies are responsible for monitoring LIHTC property owners by requiring them to certify on an annual basis that they are renting units to qualified low-income tenants. If property owners are found to be out of compliance, they can lose some of their credits.

Developers may claim LIHTCs themselves. However, due to limitations and the lack of enough taxable income, most developers choose to find tax credit investors, who provide cash that is channeled into the development. The developer can either work with an investor who invests directly into a partnership (or LLC) and receives tax credits or work with a syndicator who acts as a broker between the developer and investor. To benefit from economies of scale, syndicators pool several projects into one LIHTC equity fund. Then, syndicators market the tax credits to investors who essentially invest in a piece of the syndicator’s fund. This spreads the risk across the various projects benefiting from the fund.

The LIHTC is a complex income tax area, requiring owners and investors to comply with numerous administrative rules and regulations such as maintaining the required number of income-eligible tenants and ensuring that the appropriate documents and records are filed and maintained.

The paperwork associated with LIHTC properties is extensive to say the least. Apartment owners/investors must contend not only with the application process, but the carryover allocation, cost certifications and submission of numerous compliance forms on an annual basis.

The LIHTC program can offer developers and investors great opportunities to provide quality affordable housing to low-income residents and an opportunity to earn a profit. But because of the LIHTCs complexity, it is essential to consult a tax adviser when getting into this tax area. 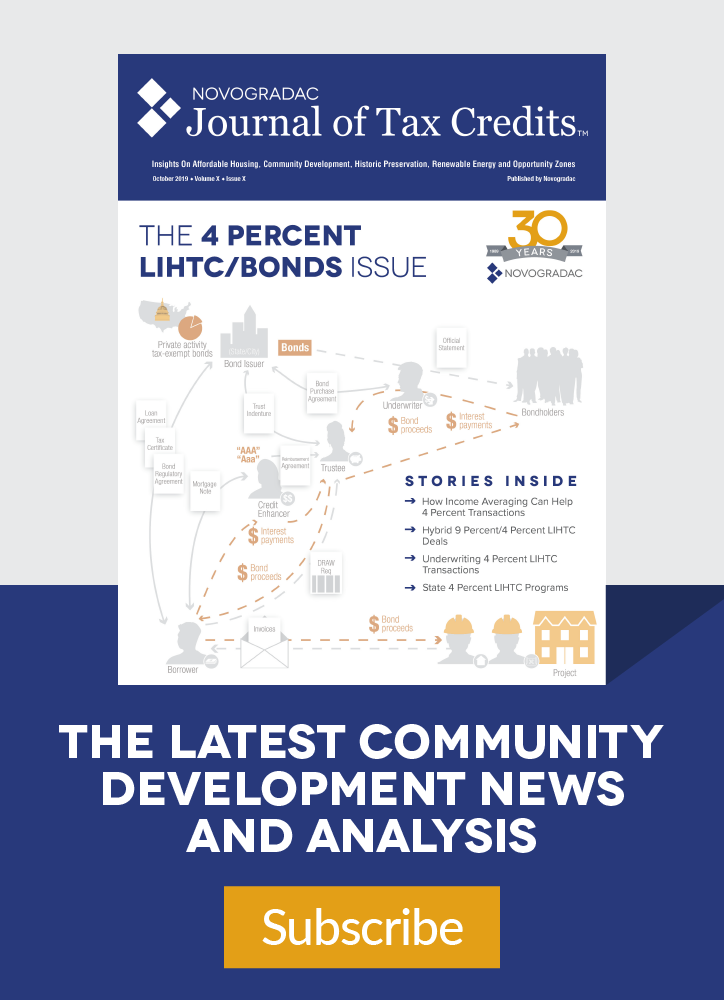 Understanding the Final Adoption of the Available Unit Rule with the LIHTC Average Income Test
How 2021 ACS Data Will Affect FY 2023 HUD Income Limits
With a Divided Congress, 2023 Shaping Up as Year to Focus on Regulatory Guidance
END_OF_DOCUMENT_TOKEN_TO_BE_REPLACED