Novogradac & Company and PolicyMap have updated this tool and the data in the searchable maps below reflects the 113th Congressional district boundaries as determined by the 2010 census.

On Oct. 31, 2017, the CDFI Fund released updated 2011-2015 American Community Survey (ACS) low-income community (LIC) data for the New Markets Tax Credit (NMTC) program. The new data can be used beginning Oct. 31, with a one-year transition period in which applicants can alternatively choose to use 2006-2010 data.

During the one-year transition period, both sets of data will be available in in the NMTC Mapping Tool. 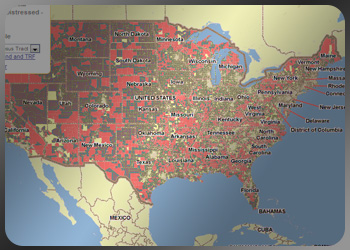 Video: How To Use the Mapping Tool

As part of its efforts to ensure that non-metropolitan counties receive a proportional allocation QEIs under the NMTC program, the CDFI Fund published this list identifying 6,488 NMTC-eligible census tracts located in non-metropolitan counties. The CDFI Fund says these census tracts qualify for NMTC investments because they have a poverty rate of at least 20 percent and/or a median family income that is at or below 80 percent of the applicable area median family income.

Metropolitan and Micropolitan Statistical Areas of the United States and Puerto Rico, December 2003

This Census Bureau map shows metropolitan and micropolitan statistical areas, metropolitan divisions and their component counties. Click the image for a larger version.

Metropolitan Area
The general concept of a metropolitan area (MA) is one of a large population nucleus.  Each MA must contain either a place with a minimum population of 50,000 or a U.S. Census Bureau-defined urbanized area and a total MA population of at least 100,000 (75,000 in New England)

Urban
Within Urban, you have Urbanized Areas and Urban Clusters.

Urban Cluster (UC)
An urban cluster (UC) consists of densely settled territory that has at least 2,500 people but fewer than 50,000 people.

Rural
Rural consists of all territory, population, and housing units located outside of UAs and UCs.

NMTC Investor Considerations When its Investment in a CDE Has Been Reduced to Zero
First-Time NMTC Allocatees Plan to Commit Funds to Manufacturing, Real Estate, Job Creation
CDFI Fund Announced Awards of $5 Billion to 100 CDEs in CY 2020 NMTC Allocation Round
END_OF_DOCUMENT_TOKEN_TO_BE_REPLACED